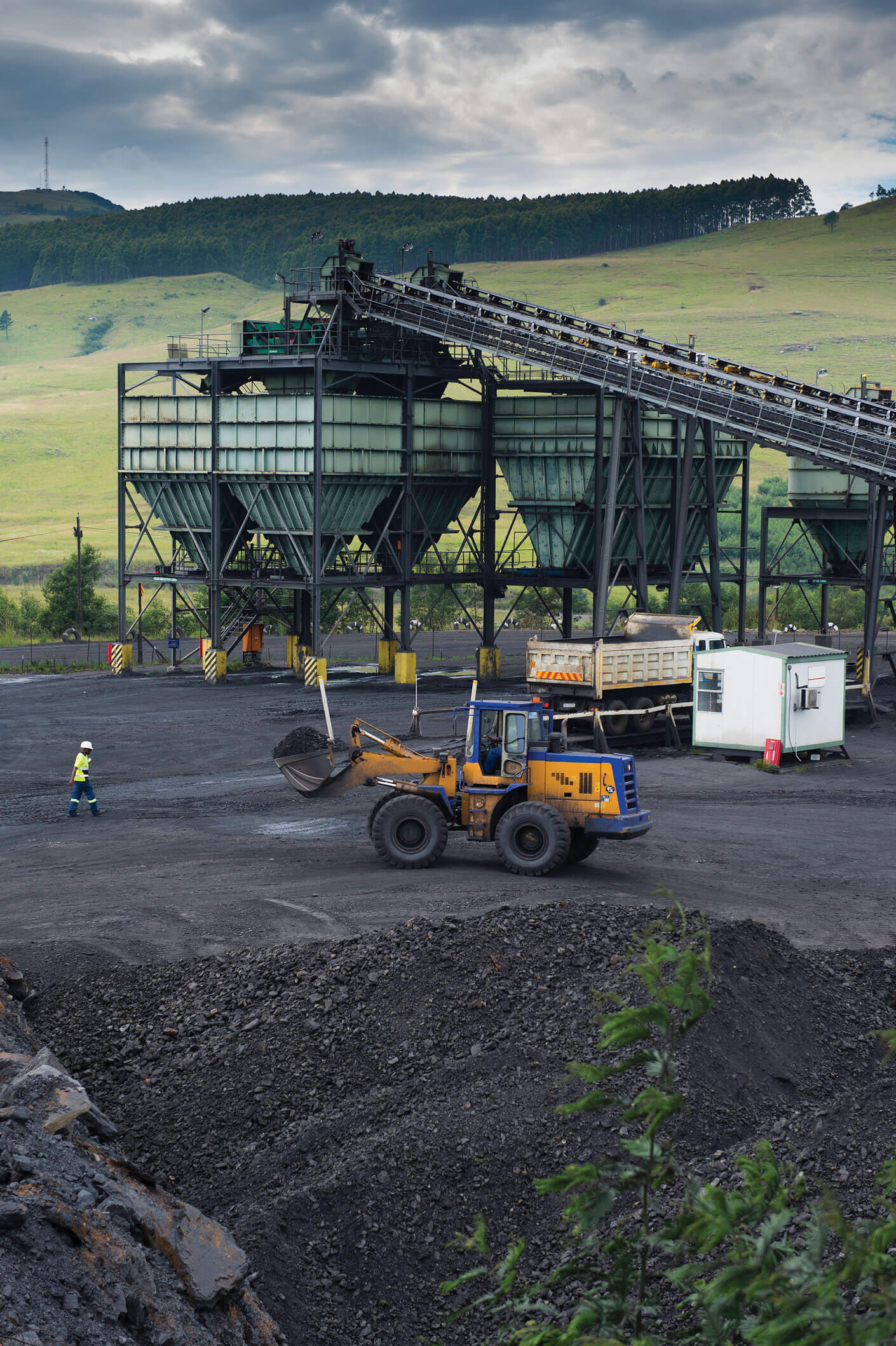 The JSE-listed coal mining company Wescoal is looking to possibly become a broader energy company in which coal remains a substantial but reducing component alongside other energy pursuits such as renewables, Wescoal interim CEO Robinson Ramaite said on Monday.

Outlining the company’s major challenges in an interview with Mining Weekly, Ramaite revealed that it is “more and more likely” that Wescoal – which now has five operating coal mines after last month delivering the first coal from Moabsvelden – will be positioning itself as a broad energy company focused on energy generation across different areas, including renewables, while maintaining a fair amount of coal involvement that will reduce over time. (Also watch the attached Creamer Media video.)

The operations of the junior coal mining company, in which RBFT Investments last month increased its shareholding substantially, are focused mainly on supplying thermal coal to Eskom, in a context where there are increasing environmental issues, a drive towards renewable energy and a need to reduce carbon emissions in the medium to long term. RBFT is a consortium that has the Industrial Development Corporation and Simeka Capital Holdings among its investors.

Wescoal has an impressive path of having progressed from being a company trading coal to one currently supplying around 10-million tonnes of thermal coal a year to Eskom.

The company’s earnings before interest, taxes, depreciation and amortisation (Ebitda) have advanced to around R1-billion but despite admirable Ebitda and an underlying net present value of close to R3-billion, its market capitalisation is lagging at around R500-million.

Backed by his experience of being the long-standing Wescoal non-executive chairperson, a leading light with United Manganese of Kalahari (UMK) and chairperson of Simeka Group, Ramaite is intent on unlocking the true value of Wescoal during his period as interim CEO and of ensuring that Wescoal is seen as a promoter of renewable energy and climate change mitigation, at a time when the coal company is facing considerable pressure from funding institutions.

Wescoal is not alone in this, with even Eskom and local banks facing similar pressures from international funding partners.

“We have seen a number of international banks and asset managers saying that they are no longer allocating any money to coal operations. And dare I say that in some instances, it even affects you personally. You will have your bank calling you, saying, Mr Ramaite, we understand you are still in coal,” he said.

“This is of concern to us because we want to be seen to be promoting renewable energy. The reality of South Africa, however, is that coal is going to be with us for quite some time. It’s a very big part of our energy mix. There is a drive towards improving our renewable energy and other forms of energy consumption but coal will still be here with us. For how long, we don’t know. I’m guessing 2050, or somewhere thereabouts. So, it still has quite some time to go but this does put pressure on coal mining companies, particularly if you are in a listed environment, to say well how do you mitigate this pressure from the environmental lobby groups but also how do you incorporate the need for genuine migration towards renewable energy. This is one of the challenges we’re facing as Wescoal and we have to respond by looking into transforming ourselves into a broader energy company where coal will just become one of the components.

“We’re working through various proposals and assessing various scenarios but it’s more and more likely that we’re going to go the route where we position ourselves as a broad energy company which is focused on energy generation across different areas, including renewables while maintaining a fair amount of coal because you can’t just dump it, you have to reduce it over time,” he said.

“The second major challenge for Wescoal is that we are small. We don’t have big institutional investors. We are not seeing growth in our share price, despite having had tremendous growth from just trading coal a few years ago to now supplying Eskom with around 10-million tonnes of coal a year.

“There’s been growth in Ebitda to around a billion rands yet we have this listed vehicle, which is really not performing. It’s under-valued quite drastically. It has a R500-million market capitalisation but with an underlying net present value of close to R3-billion. So, one of the challenges, from an interim CEO point of view, is how do you unlock this value, because shareholders who have been loyal to us over a period of time want to see that. Obviously linked to that is the fact shareholder value must also come in the form of dividends and any other measures that will help shareholders,” Ramaite outlined to Mining Weekly.

Mining Weekly: Regarding the bigger picture, do you think it might be time now for some sort of major discussion to take place between the coal producers and Eskom, to work out the way forward?

Ramaite: Yes, certainly. There’s a lot of discussion now, particularly given the South32 discussions around pricing, and the State Capture Commission. A lot of the decisions are now part of the public discourse.

As South Africans, we also have a concern about the increasing cost of electricity. We’ve just got a 15% increase and that’s quite hefty. So, yes, I would think there’s an opportunity for Eskom and coal producers to sit side by side and look at how junior producers like ourselves and the big producers, like Exxaro, South32, Seriti and Anglo American can put our heads together to help Eskom have a much more sustainable coal pricing policy because it’s a major input component into the current power stations.

Needed is a much more certain procurement framework because opening mines is not an easy thing. You need a three-year planning exercise just before you even start opening a mine and you need to know what your pricing looks like. You can’t run coal procurement by short-term tenders. It just doesn’t work.

The second issue is transport and logistics, which are at the moment close to between 25% and 30% of the price of coal delivered to a power station.

If Eskom is interested in reducing costs, we’ve got to sit together and talk about this component of transport and logistics because we can start exploring issues together with Transnet about using trains more efficiently. The clogging around power stations at the moment is something that not even logistics providers are happy with. You have a very unproductive environment because you also have these stop-start situations. Today, three Kusile units are working, then the next thing there is a breakdown, you’ve got a line of trucks there which are ready to deliver but the power station can’t take deliveries. There are a lot of issues that involve planning that I think players will be involved in and can assist Eskom with certain ideas.

I guess the third issue would be some consistent pricing strategy and this is part of the legacy of what was inherited from the previous leadership, where the pricing strategy from an Eskom point of view is not logical. So, you could be supplying to the same power station and the other supplier is being paid very high rand per tonne, R600/t and R650/t, and you’ve been told know stay there at R450/t or R500/t.

There’s no consistent pricing strategy. My view, certainly, is that there are not that many players in the industry, this is something that can be resolved via a good conversation with Eskom and where we can help each other manage our challenges.

Mining Weekly: Power stations used to be built close to coal mines and conveyor systems would feed the coal directly to the power stations, which seems to be ideal. But there is far more road transport currently. What sort of cost does that add?

Ramaite: Just to give an example, the one mine which we also acquired because of the difficulties between Eskom and the long-term coal contractors is Arnot Mine. At the height of the State Capture issues, as you know, discussions between Eskom and Exxaro broke down and Eskom decided not to continue with the Arnot contract, despite the fact, by the way, that given that it was a cost-plus mine, Eskom has close to R1.6-billion to R2-billion of environmental liability, which it must still service in that mine. So, while Eskom stopped the contract, it is still left with the environmental liability, which is on Eskom’s books, as we speak. But Arnot has got a conveyor belt right through to Arnot power station, so when they stopped that contract, they stopped the opportunity of using that conveyor belt. They resorted to trucking for whatever reason. There’s no way that it can be efficient. There is no way it cannot cost more and fortunately, we are almost close now to concluding our discussions with Eskom. We want to get a new contract for Arnot mine and to revive that conveyor belt. The same can be said for many other things. I think this is part of the dynamic in the Seriti/Duvha discussions. It speaks to the issue of logistics and clearly, the costs will be lower if you are using the conveyor belt to transport the coal directly to the power station.

Mining Weekly: Swinging out of coal to another commodity which you personally are involved in and that is manganese with UMK. What is the state of play in the manganese sector?

Ramaite: There have been three to four mines that have opened in addition to those of the traditional manganese suppliers such as Assmang and Samancor, which is South32 and Anglo American. Since the liberalisation of those manganese fields, we’ve had Tshipi, part of which is listed in Australia, ourselves as UMK, Kudumane and Kalagadi, which hopefully will soon kick off, too. That’s quite a lot. I think we’ve moved from around four million tonnes of exports to close to 10-million tonnes to 12-million tonnes of exports now, which is quite an expansion. We’ve not seen any adverse reaction from the market to increased South African production and increased exports from South Africa and we’ve seen improved performance from Transnet. For example, whereas before manganese only went to Port Elizabeth, we’re now also exporting via Saldanha, and that’s on a price parity basis. We still don’t use trains for all our exports. We still go by road as well. Sometimes via Durban. This manganese comes from the Northern Cape. That area of Kathu is very far but it’s an indication of the fact that demand continues to be fairly robust. Prices have gradually increased, although not quite back to 2008 levels, when we were getting close to $10/dmt. But we’re around $5/dmt and $6/dmt, which is very healthy. I think post-Covid, the major impact on the manganese export side in particular are the freight rates. We’ve seen quite a dramatic increase in freight rates, which probably has to do with the shipping companies trying to recover whatever losses they suffered during the lockdown. But I would say that the South African manganese industry is quite healthy. Exports are good. We’re still mainly focused on China as the major uptaker, so when we see reports of sustained economic growth in China, that bodes well for the manganese industry.

Ramaite is a former Director-General of the Department of Public Service and Administration.